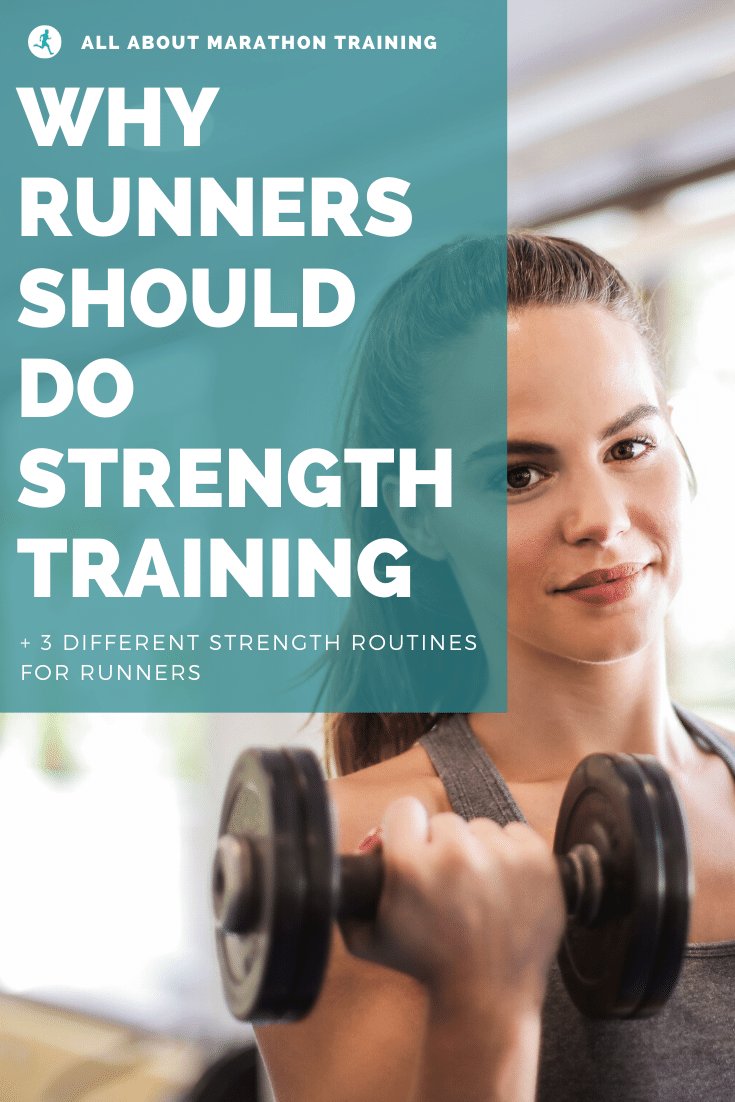 Is strength Training for Runners Something ALL runners and marathoners should do?

As a beginner marathoner it is not as essential as you mainly want to focus on the race and just finishing by building mileage through your long runs.

However when I did incorporate strength training I really and truly noticed the positive difference.

Strength training for runners is something that any serious marathoner is interested in.

The problem is that without guidance certain strength moves and techniques do more harm than good in terms of faster times, biomechanical efficiency, etc.

However, with the proper guidance, training plans and form it will be highly beneficial to your running!

On this page we will talk about:

Benefits of Strength Training as a Runner


What Muscles Should Runners Focus on Strengthening?

Good thing our feet can't go on strike or they just might! On the impact of the foot striking the ground, our feet are given 2-3 times the weight of our body. Basically they take a full beating! It goes without saying that strength in the feet is imperative for warding off injuries that are common due to weak feet (and of course other issues)  such as plantar fasciitis and shin splints.

The shin muscles do not develop and adapt fast enough to running and so are often overpowered by the strong calf muscles that are behind them.

Strengthening these shin muscles will allow the muscles to become more balanced and prevent injuries like plantar fasciitis, stress fractures and especially shin splints which are so common in runners.

Our calves, which are made up of the gastrocnemius and the soleus muscle, are responsible for flexing our leg (bringing it up toward the butt) and for plantar flexing the foot (point the foot downwards) – two very important movements in our running stride.

Running strengthens these muscles very quickly and not much strength training is called for as runner however some is good for preventing such injuries as Achilles Tendonitis and plantar fasciitis.  Strong calves also will help to prevent ankle injuries by providing stability.

The quadriceps are the group of muscles on the front of the upper leg above the knee. Like the shins, they develop slow from running and are can cause us problems as the hamstrings (right behind the quadriceps) develop at a fast rate when running.

Weak quadriceps can lead to the ever forbidding Runner's knee as one of their main functions is to stabilize the knee. They also are responsible for absorbing the impact during a running stride. Strength in these muscle is crucial!

The hamstrings are located in the back of the upper leg and are responsible for the eccentric work (high force producing work) while running.

During the running stride, the hamstrings go from acting as a knee stabilizer to extending the hip rapidly which can cause enormous amounts of strain.

Running does strengthen the hamstrings quite a bit and so, like the calves, not much strength training for runners is required of them.

The core comprises the muscles of the hips, pelvis, lumbar (lower) spine and the abdominal muscles. It is where our center of mass is located and for a runner is more important than one might think. T

he most valuable asset of a strong core is the ability to maintain proper form and stability during later miles of a run or race when the body is starting to fatigue.

Strong abdominals can counteract the force on the lower back which can become tense from pressure during long runs. Weak hips and pelvis can lead to a host of running issues including stress fractures which are quite common in distance runners, especially women runners.

I will group the upper body together since although they are important, they are not the powerhouses of running.

The upper body consists of the arms, shoulders, chest and back. Like the core, the strong upper body will aid in form maintenance in high mileage runs.

It really can make all the difference when trying to set a PR or place in a certain category to have a strong upper body as it will also help in stiffness that builds up and in dealing with the fatigue of the marathon.

The arms in particular are important for balance and form maintenance.

An added bonus to arm strength is that there is a direct correlation between speed of arm swing and leg speed. So bottom line is strong arms will give you that kick to the finish line!

What is the Best Kind/Type of Strength Training for Runners?

Running a marathon is an extremely aerobic (oxygen requiring) event.

Nobody training for a marathon will train like a football player.

No, they will go out and train in what they are performing in – running.

Training in both pathways will not allow the body of an aerobic athlete to make the large aerobic potential gains and adaptations that are possible and so instead of helping performance it will actually hinder it.

Strength training is more of an anaerobic method which is why it is extremely important as a runner to do lifts and techniques of a more aerobic nature.

There are four different abilities that any lifter trains in:

As a marathon runner we want to focus on Muscular Endurance Strength Training.

Muscular endurance is the ability of the muscle to repeatedly contract over long periods of time, as in a marathon!

So although most people think of ALL lifting as "strength training" we as marathoners are really going to pursue "muscular endurance lifting".

Yes, it is still "strength lifting" however in the true meaning of the words and abilities, strength and muscular endurance work are different.

Runners aren't looking to becoming big and buff as true strength, power or hypertrophy work would make them.

Having lean muscles is a benefit in strength training for runners in the fact that weighing less will help you to go faster and not tire as easily.

This doesn't mean to say you aren't strong, only that you are leaner and have more endurance capabilities.

True strength and power moves focus more on high intensity levels  (usually greater than 85% of a person's one rep max) with low sets (usually less than 6) and reps and longer rest periods (anywhere from 2-5 minutes) between sets.

As a runner we need to train differently and so we follow the components of muscular endurance training.

This may seem like haphazard protocol but as soon as one increases their rest breaks and lowers there sets they are no longer doing muscular endurance work.

Here is where marathon running efficiency is compromised.

I'll make it easy for you to do strength training for runners and break it down exactly as it should be done so no guess work will be involved!

3 different strength training for runners plans to get you started! 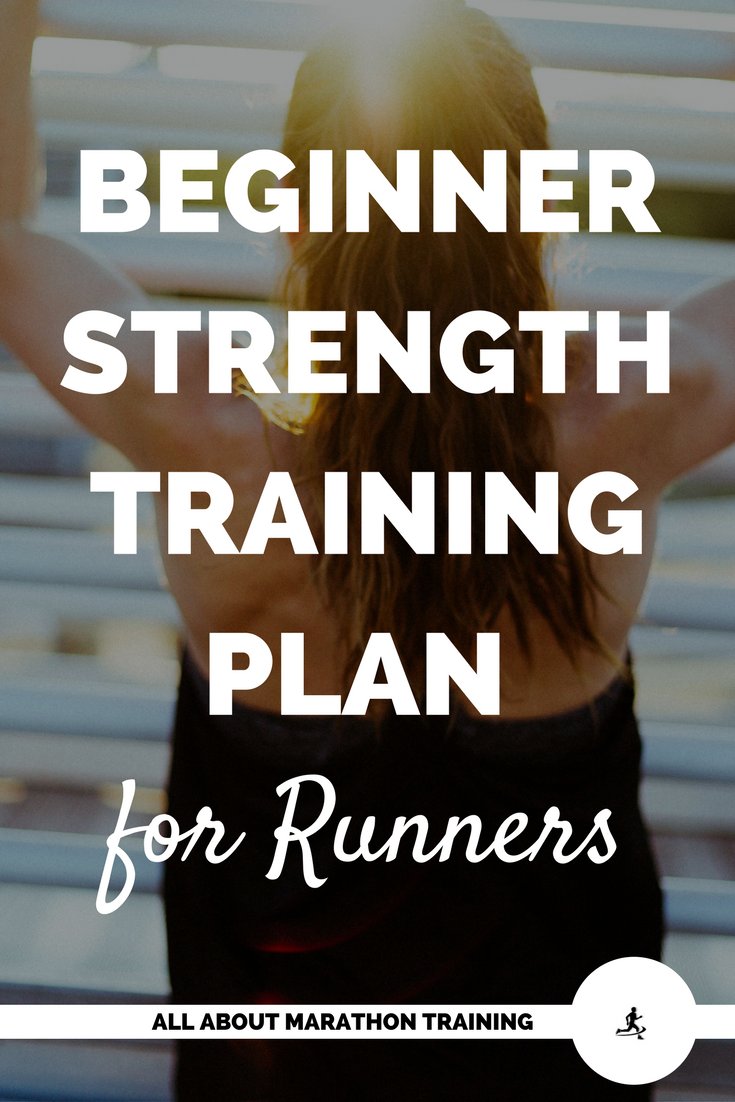 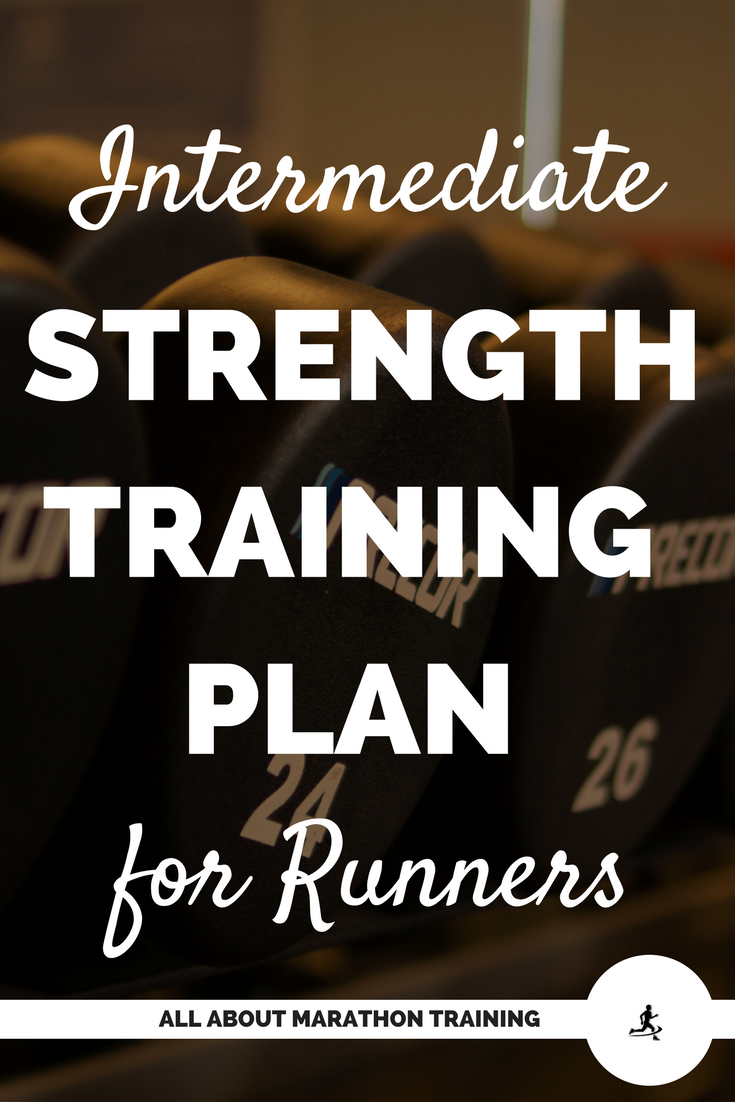 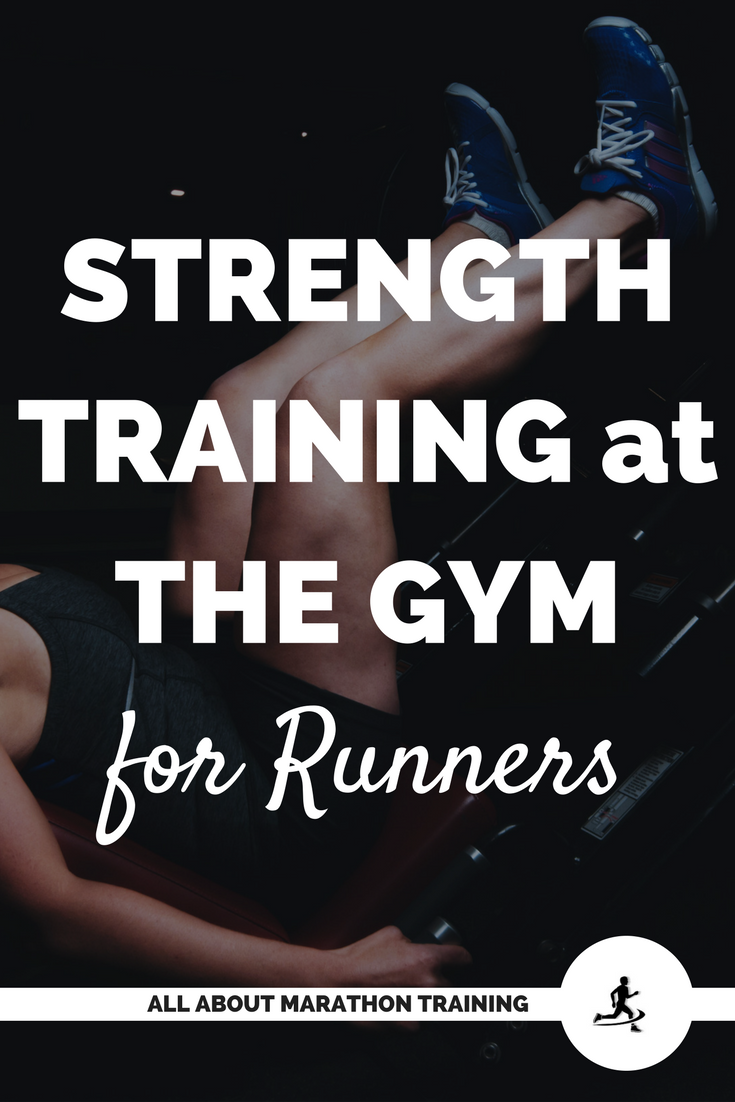 Strength Training at the Gym

Other Strength Training for Runners Workouts: 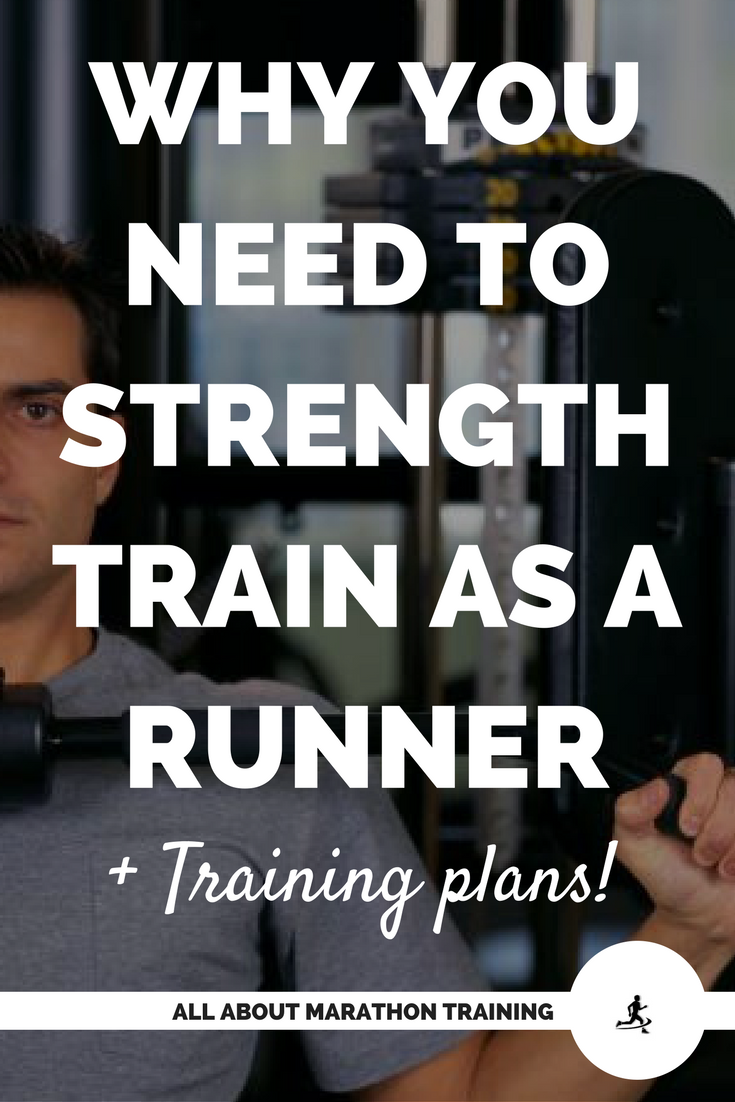 The takeaway points for strength training for runners: 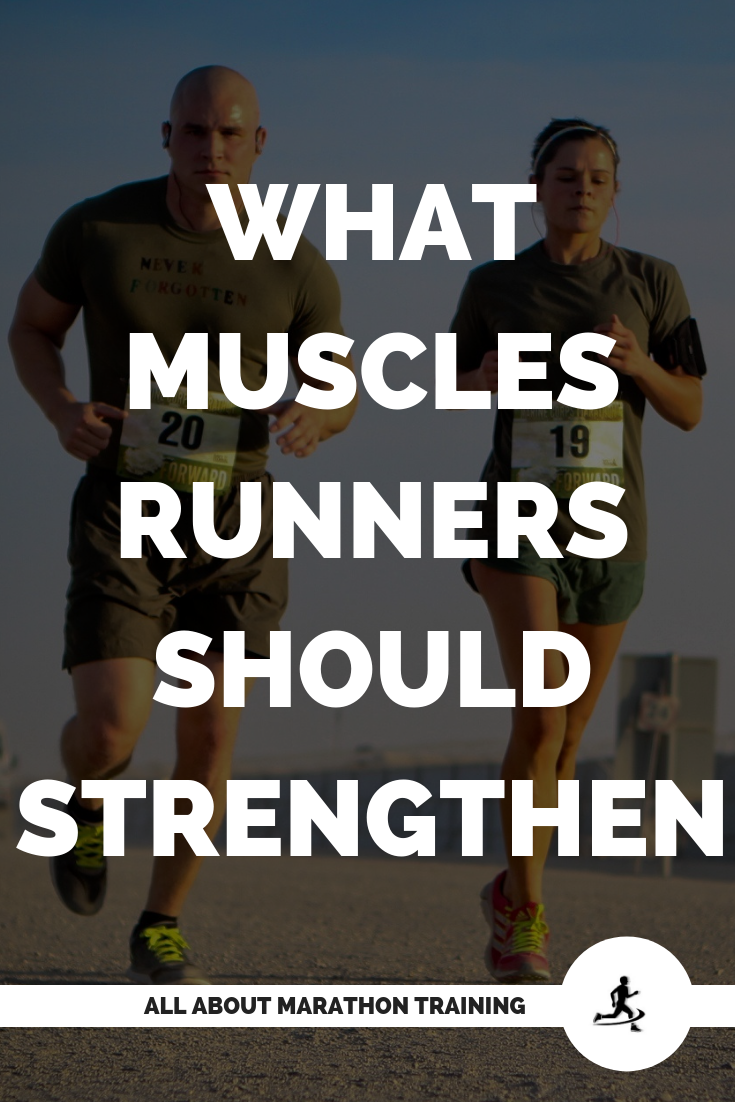