Every marathoner has a marathon story. Every marathon, in fact is a story. So much training,  so much running, so many emotions, so much support, so much comedy, tears, pain and victory. What's not to love about the marathon?

These pages are dedicated to YOU. You as a runner, a marathoner, an achiever.

You have a story.

You can inspire others who are taking up the marathon, training for their first race, or who just need a fresh breath of motivation.

So share that! Go to the bottom of this page and fill out the form. You will get your very own webpage with your special marathon story on it! (Pictures are great too!) Everyone has something to give, whether big or small, funny, sad, motivational or just an experience that they own. 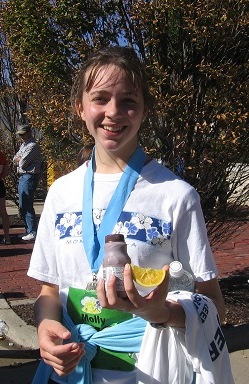 I'll start with sharing my first marathon story. It's nothing profound but for me it will last forever.

I remember standing at the starting line of my very first marathon feeling smart and fit with my California t-shirt and navy blue skort...and looking back, at 15 years old (see picture :)) I was so naïve about this marathon business.

It was a small marathon of about 100 runners  and we had driven 4 hours to get to the starting line.  I don't know that the beginning of June is the best time to run a marathon in the Midwest as all the runners were hoping that it wouldn't become too hot and it wasn't looking to be too promising.  The course was a 13.1 mile loop so I, wearing a green "full marathon" bib  would run the course twice.  (I have since learned that scouting out the half and full marathoners by bib color is one of the highlights of a runner's race. Let's admit it, we all like to size each other up. :))

As the gun went off, the pack started to move. We were off and I really didn't have a clue in the world about what to expect. The miles ticked by (as they do in the beginning) and a host of thoughts flitted  through my head.

I became acquainted with the bipolar nature that runners acquire during a race ."This is it", "This isn't so bad", "Why is that runner so obsessed with his watch", "Did I drink enough Gatorade at the last aid station",  "I hope I didn't drink too much Gatorade at the last aid station and have to waste time using a Port-A-John","Where IS that next mile marker?!", "I can't wait to eat a 2000 calorie meal after this", "Oh no, I think someone is passing me", "I love this" to "I hate this".

Suddenly the first loop was done. I had gone 13.1 miles. My sister, who was running the half marathon finished and received her medal. I on the other hand had another loop to go to receive that coveted prize.

I wouldn't say that I was dreading that final lap around the loop but I wasn't exactly thrilled about it either. Then before I took off from the aid station, my dad became a bandit and  jumped onto the course to run with me!  We started off together on the next loop. It weaved in and out through neighborhoods until it sent us on a long stretch of interstate. The runners were sparse and I was so thankful to have my dad, with 10 marathons behind him, there with me.

The mile markers  seemed to be coming slower and slower. The pain was getting stronger and my mind began to confirm that this had been a bad idea. Whose idea was this anyways? I never wanted to do this again! The mental strain was tough to overcome.

And then, as we neared mile 23, I noticed a familiar van parked ahead in the distance. My family had come from the starting line to cheer us on! They handed me a banana gave me a couple hugs and sent me off with the greatest second wind  that I have ever been blessed with.

The miles after that went fast and soon that glorious finish line was right in front of me. I finished strong in 4 hours and 36 minutes and the second I touched that line I knew it had all been worth it. I had to run another one. Soon.

For me, that first marathon was all about family. I could never have done it without them. And looking back to that June day, not so long ago, I realize  that the more challenging something is , the more you will cherish it when you conquer it.

Now it's YOUR TURN.

Let's have some fun!

Tell Us Your Marathon Story! I know you have one!

Return from Marathon Story to Homepage